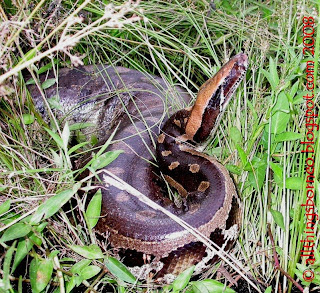 There are two species of pythons on Borneo, the more well known of which is the bigger, in fact arguably the biggest and definitely the longest snake in the whole world, Recticulated Python (Python reticulatus). The other species is Python breitensteini the endemic Borneo Python, aka Borneo Short-tailed or Borneo Blood Python. It was until quite recently regarded as a sub-species ot the Sumatran Short-tailed Python and carried the name Python curtus breitensteini. 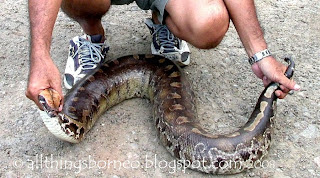 The trick is to hold it behind the head firmly and to stand back immediately when you release it. It may or may not try to bite your hand or somewhere else! Better still just leave it alone in the first place!

The Borneo Python is a short and stout snake seldom exceeding 1.5 metre (5 feet) in length. It is non-venomous but can give a nasty bite and I learned in a rather painful way that, like people, some individuals are more agressive than others! Some will tolerate handling without trying to bite while some, even baby ones, will strike readily! Over the years working and living in plantations I have found them to be just as common as reticulated pythons, and unfortunately, as they move more slowly they are more often caught (for the pot!) and more are seen as roadkills! Many times I have seen them crossing the road at night especially in wet weather and I always slowed down to watch them cross. Once at night while driving in a hurry I saw one of these fat guys on the roadside, however to my dismay the next morning when I passed the same road it was still there - run over and dead (most likely deliberately by some heartless driver - many people in Borneo are inexplicably anti-snake!)
Unlike the other species, this is a mainly wait-and-ambush hunter, I've never heard of one climbing up a chicken coop to take a bird, and usually lie in wait near ponds and swamp for their prey which are probably mostly rodents and small mammals.
Baby Borneo Pythons are chubby and rather cute looking, even to some of my snake-fearing friends, and one may be tempted to keep them as pets! However though I can never resist picking them up , I now always release them after taking their photos... 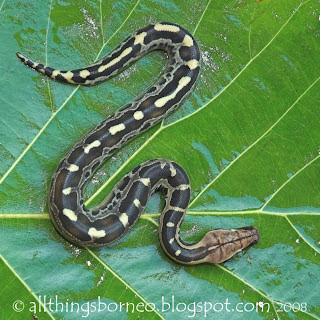 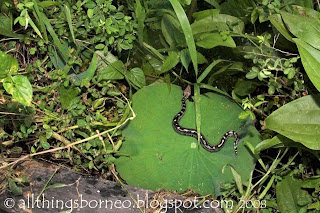 The correct thing to do is to set it free!

Hello. This post is likeable, and your blog is very interesting, congratulations :-). I will add in my blogroll =). If possible gives a last there on my blog, it is about the Estabilizador e Nobreak, I hope you enjoy. The address is http://estabilizador-e-nobreak.blogspot.com. A hug. 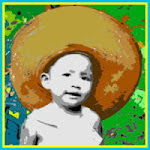