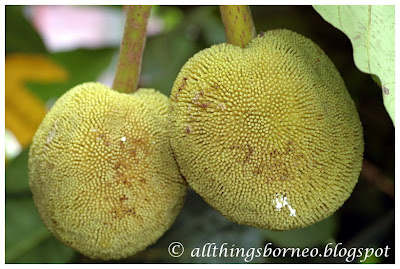 The tarap is a fruit that Borneans love, well, I don't think I know anyone who grew up here who doesn't like it. However visitors or newcomers to this parts either hate it outright or eventually get used to it and like it! They say it's the smell... not like that of the durian but somewhat strong. 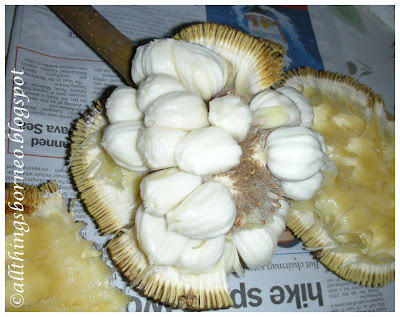 Photo 2: A ripe tarap is easily opened with your bare
hands - the white stuff is the sweet yummy part!

Botanically it is known as Artocarpus odoratissimus and belongs to the Moraceae plant family like its related cousins the Jackfruit or Nangka, Chempadak and Breadfruit.

The tree of the Tarap grows to a height of 20-25m, and is usually grown from seed, fruiting starts when the tree is about 4-5 years old. The flowers, both male and female look like light-bulb-shaped and sized fruits, the male inflorecence drop to the ground soon after releasing pollen while the female heads continue to grow to a large roundish and almost football sized fruit covered with spiny protrubences. The white flesh-covered seeds are attached to a centre core inside the fruit and can be seen (and eaten) when the skin is removed. The flesh is sweet with a strong fragrance. 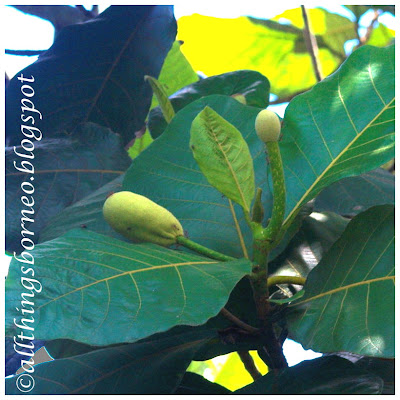 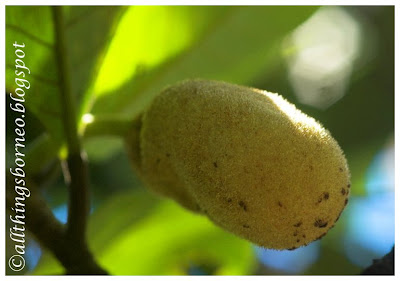 Photos 3 & 4: Tarap infloresence, these are the flowers, the male
head below is about to wither and drop after releasing pollen
The Tarap is widely cultivated in Borneo and many "improved" varieties are known. Although it is also grown in the Philippines where it is called Marang, experts believe that Tarap is native to, and possibly introduced there from Borneo where wild trees are common in the jungle. Whereas in the Philippines the species only exists as cultivated plants and its distribution there limited to Mindoro, Mindanao, Basilan and the Sulu Archipelago. It is also known in Peninsular Malaysia (terap) and southern Thailand in the wild (with inferior fruits) but is not commonly cultivated.
Other names: Timadang (Kadazan/Dusun)
Posted by Borneo Born at 17:30

looking at these pictures makes me hungry for buah tarap~~

Looks delicious.When I was there I missed out on tarap but enjoyed much durian.I have a project for farmers and wonder if you would mail me sone tarap seeds when they are in season?could send ou something unusual too. JF
guarapo123@yahoo.com

Can tarap be found in sarawak too? and which part of the year are they in season? I left Sabah for singapore some 30 years ago and would very much like to taste my favourite fruit again.

Where can i get that Buah tarap? I went to the market in KK and its finished. Di mana mau dpt buah tu if area kk??

Good priced Tarap (1 to 2 RM each)can be found on the main road that passes Babagon 9km from the Shell station at Penampang. I'm making a big batch into a liquor. Played about with this idea last year and in turned out amazing.

Good priced Tarap (1 to 2 RM each)can be found on the main road that passes Babagon 9km from the Shell station at Penampang. I'm making a big batch into a liquor. Played about with this idea last year and in turned out amazing.

I was very lucky when I visited Pekan Kundasang last two weeks and found this delicious fruit abundantly was sold there. I happened to collect the seeds and plan to grow in Java. :) Thank you for your writing. It truly reminds me of our tarap party there! Haha!

Recently while walking in the MacRitchie forest reserve in Singapore we saw one mature Terap tree with a sign explaining this specie. So it looks like someone introduced this fruit tree into the Nature Reserve years ago.

Looking to trade rare tropical seeds with anyone from Borneo, I live in Puerto Rico and focus on scented or unusual flowers and vines Frank tropicalgardener@gmail.com

Anybody help me to know which month in a year terap fruits are available in the market?